Through their company, STL Ocarina, Laura and Dennis Yeh have worked to make the ocarina—an easy-to-learn instrument with roots dating back to the dawn of human history—more readily known and available to school music programs, which have typically relied on the recorder as their main basic-teaching instrument. Performers and music educators trained in the Suzuki method of instruction, Laura and her husband Dennis partnered with ocarina makers from around the world to produce a variety of new, improved models of the ocarina. 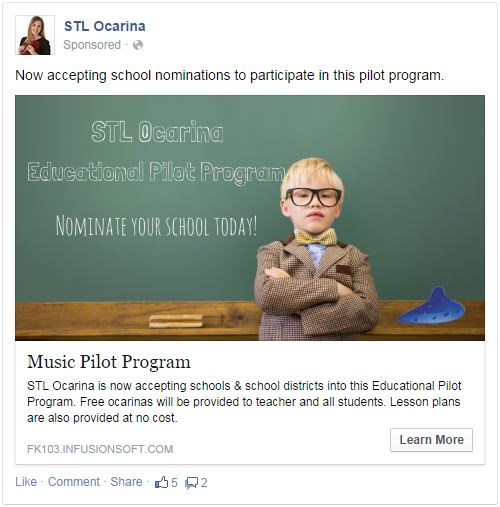 The next step, naturally, was to partner with school systems. With mere weeks to the start of the new school year, Wasabi Publicity was asked to launch a strategic campaign to garner interest in the ocarina pilot program STL Ocarina designed to fulfill this mission.

Through a targeted Facebook ad campaign, Wasabi aimed the program directly at school decision makers: music teachers, principals, and school administrators all the way up to the superintendent level. We then paired this strategy with a nomination-style application to get people excited about nominating their school with the hope of being selected. School leaders and supporters alike began vying to have their school included, which naturally created a large pool of interest very quickly.

STL Ocarina had hoped to come away with at least 10 interested schools; 51 schools applied through the nomination system within 2 weeks.

The campaign was a resounding success. STL Ocarina now has plenty of schools interested in the pilot program and a pool of potential clients at the ready for when they launch the full ocarina school program after the pilot programs conclude! Wasabi launched the strategy within days of determining the client’s need, and the timing here was crucial. Just as teachers returned to work to ready lesson plans, just as administrators began putting their strategies for the year into place, STL Ocarina’s pilot program came onto their radars in a way that interested and excited them into vying for participation.